I was a college student on my first overseas trip when a group of heavily armed men from a right-wing Afrikaner militia group crashed an armored vehicle through the glass doors of the Johannesburg World Trade Center.

Inside the building, participants in a multi-party negotiating process were convening to map the transition from apartheid to non-racial democracy. The men who raided the building, in combat gear equipped with machine guns, were part of a 3000-person protest surrounding the building. Their attack was an attempt to disrupt the negotiations.

It was a tense moment. Weeks earlier a popular anti-apartheid activist had been assassinated in his driveway. Politically motivated murders between rival groups were spreading like cancer through the townships. Many feared that a civil war fueled by political polarization, racial violence, and malevolent interference from unidentified parties would drown the country in bloodshed.

But the negotiators pressed on, setting a date for a national election.

Shortly before the scheduled election, Nelson Mandela was a guest on a radio program to which people called in to share their views. One of the callers was a man who, ten months earlier, had been among the men storming the World Trade Center. The caller threatened that the country would be “embroiled in a bloodbath.”

Mandela had endured 27 years as a political prisoner. He was an architect of the anti-apartheid struggle, including the founder of its military wing. His response to the caller is rich with lessons. 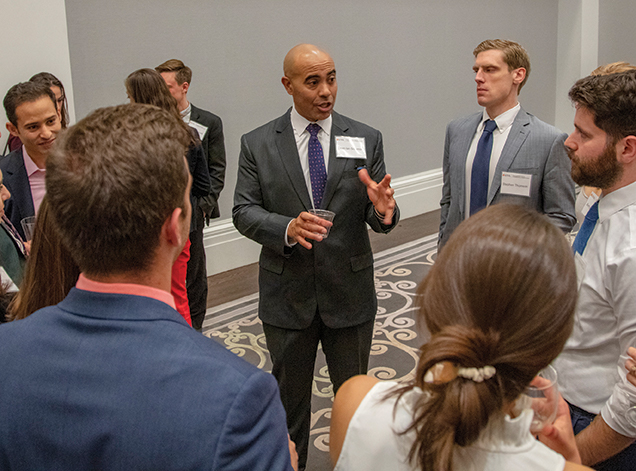 Mandela persuaded Eddy and other members of the resistance movement to participate in the elections rather than to carry out their threats of disruptive violence. By being willing to listen, Mandela was able to build trust and to find a common cause, even with an opponent. Multiple examples of Mandela’s extraordinary listening and trans-formative empathy are documented by the journalist John Carlin in his book, Invictus. In April 1994, South Africans elected Nelson Mandela as the first president of their non-racial democracy.

Listening is one of the most important skills of leadership.

As I begin my term as dean of the Batten School, I think about this current moment of intense political polarization in the United States and other democracies. I think about the inextricably linked global policy challenges we face—including, for example, climate change, violence, and refugees which are all discussed in these pages—and the imperative of cultivating ethical and enlightened leadership to heal and strengthen our communities.

I intend to do a lot of listening. I aspire to practice the lessons I’ve learned: to listen at least twice as much as I speak, to listen with an empathetic imagination for the values and emotions expressed behind people’s words, to listen with an open mind and a willingness to be changed by what I hear.

In listening to members within our community, a few recurring values stand out. First, the Batten School is a community that sees public service as fundamental to our mission. You will see compelling examples of this commitment illustrated in this edition of Batten Reports.

Second, the Batten School welcomes the challenge of becoming a thriving community whose members are as diverse in thought, experience, and background as the world we wish to serve. We are excited to model the norms, behaviors, and practices embodied by our nation’s motto: E. Pluribus Unum— out of many, one. E. Pluribus Batten!

Third, we are energized by the Batten School’s unique blend of leadership and public policy as multidisciplinary fields for research, teaching, and public engagement. We are proud to represent some of the sharpest and most curious minds at work in economics, social psychology, political science, policy and leadership. We celebrate the complementary contributions of world-class researchers and practitioners alike, all devoted to positive influence in the world and excellence in teaching.

I invite you to listen along with me. Let’s listen with each other, and also with others beyond our physical, intellectual, political, or ideological walls. I share Mandela’s faith that if we sit down together, and exchange views with empathy and understanding, we will come closer to each other.

And let’s be sure to listen. Our democracy may depend on it, and I believe Batten is ready to lead the way.

We spoke with Ian Solomon about the views and experiences that shaped his approach to leadership.

I was a college student on my first overseas trip when a group of heavily armed men from a right-wing Afrikaner militia group crashed an armored vehicle through the glass doors of the Johannesburg World Trade Center.

The challenges of the 21st century are marked by their interconnectivity. Migration, national security, climate change—today’s global issues are almost impossible to tease apart. What impact does their enmeshed nature have on potential policy solutions? Three Batten professors attempt to answer that question.

Within communities and across the globe, the Batten School is harnessing the power of UVA’s guiding principles