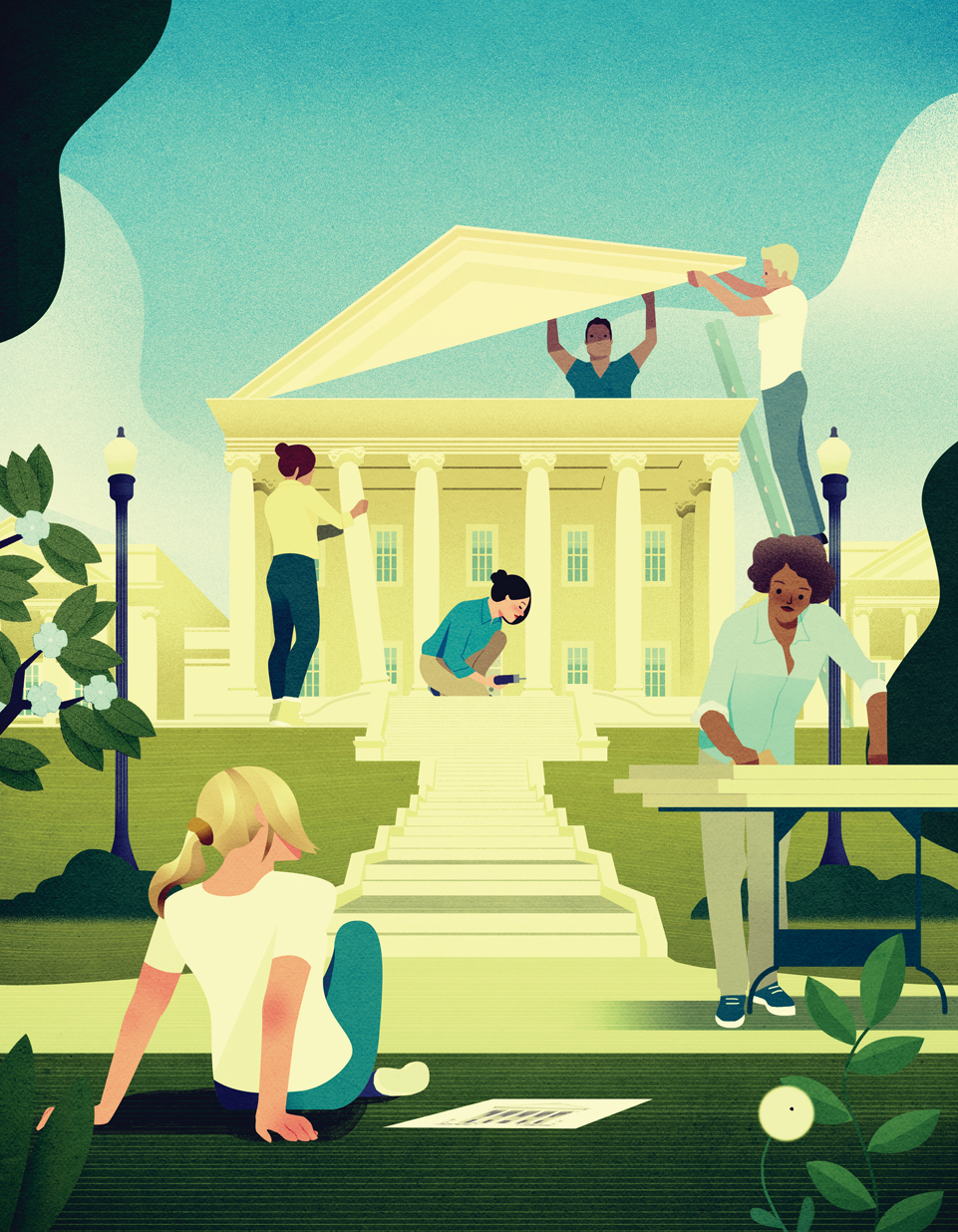 In the realm of public policy and leadership, Washington, D.C. can take on an almost mythic quality. It’s home to countless government institutions, as well as to a plethora of monuments that memorialize some of the most important figures and events from our country’s history. For these reasons and more, it’s easy to view D.C. as the romanticized metropolis depicted in Hollywood flicks like Mr. Smith Goes to Washington—the ultimate destination for anyone with policy-related ambitions.

But the capital is far from the only place where policy is made and proposed. While the Hill can hold a strong allure, positions in state governments offer a special opportunity, one that many Batten students and alums are discovering allows them to have a particularly deep impact. In Virginia and across the country, they’re making their mark in an arena many refer to as “the sweet spot.”

“It’s this beautiful middle ground between federal and local government,” says Emily Wilcox (MPP ’17). “I worked as a high school teacher in New Orleans prior to Batten but always wanted to work in education policy. Now I work for the Tennessee Department of Education, and I can see some of the policies we put forward beginning to make a tangible difference.”

“It’s the type of true policy analysis job that Batten prepared me for,” says Rigsby, of her position. “Both the quantitative and qualitative analysis courses I took have enabled me to effectively conduct interviews, as well as surveys and site visits. And what’s great is that the legislature takes the policy briefs we create using that information seriously. We get to see our recommendations implemented.”

“I knew pretty quickly that I didn’t want to go to D.C. and that I could make more of an impact at the state level,” she says. “I just finished working on a project that evaluated the effectiveness of Medicaid. This required site visits with interviews, as did a project I worked on regarding the foster care system. In this position, you do the research, you make the recommendations and you find that they are taken seriously, which makes you feel like you can actually make an impact on people’s lives through policy.”

For many Batten students—both current and alum—it was Professor Andy Pennock’s Virginia Politics and Policies course that first piqued their interest in working for state governments. Having served as a professional, nonpartisan committee staffer at the North Carolina General Assembly prior to receiving his PhD from the University of North Carolina, Chapel Hill, Pennock has a special appreciation for state government.

“With the gridlock at the federal level, state and local government is where the action is.”

“With the gridlock at the federal level, state and local government is where the action is,” says Pennock. “During my time working for the fiscal committee, I was amazed by the sheer number of things that the state government does. There are people who check to make sure that grocery stores throughout the state have the correct measuring devices, so people don’t overpay or underpay for produce, meat or fish. There are people who inspect amusement park machinery. There are so many things that we just don’t know about until we work in state government.”

According to Pennock, there are also endless opportunities to affect policy at the state and local level, which means there is a big need for talent—especially young talent. Keeping that in mind, he has invited delegates to his class every semester. Many students have found internships through connections made during these visits, including current student Isabel Coughlin.

Coughlin says it wasn’t just Pennock’s decision to invite multiple delegates to her class that helped her. “I received a lot of support from him when I was trying to decide which one to work with,” she says. “I had numerous offers from different delegates, and he helped me select the right one based on my own policy interests.”

Coughlin, who currently works for Delegate Schuyler VanValkenberg, says that although her main policy interests concern immigration, which will require her to work at the federal level, her time working in state government has exposed her to policy in a more intimate way.

“I’ve gotten to be closer to the effects of policy,” she says. “It’s exciting for a young person like me, when you’re just starting your career, to be able to interact with policymakers and feel like you’re contributing to the process. Batten prepared me for this position in a variety of ways—from the support of teachers like Professor Pennock to classes that taught me how to track pending legislation and describe complicated bills in a more accessible way.”

With the contributions of students like Coughlin, it’s clear that what many refer to as “the Batten fingerprint” is all over state legislation. And no matter what level of government those students ultimately choose for the pursuit of their goals, their experiences at the state level will guide them in the future, reminding them that there’s more than one way to make a positive impact.