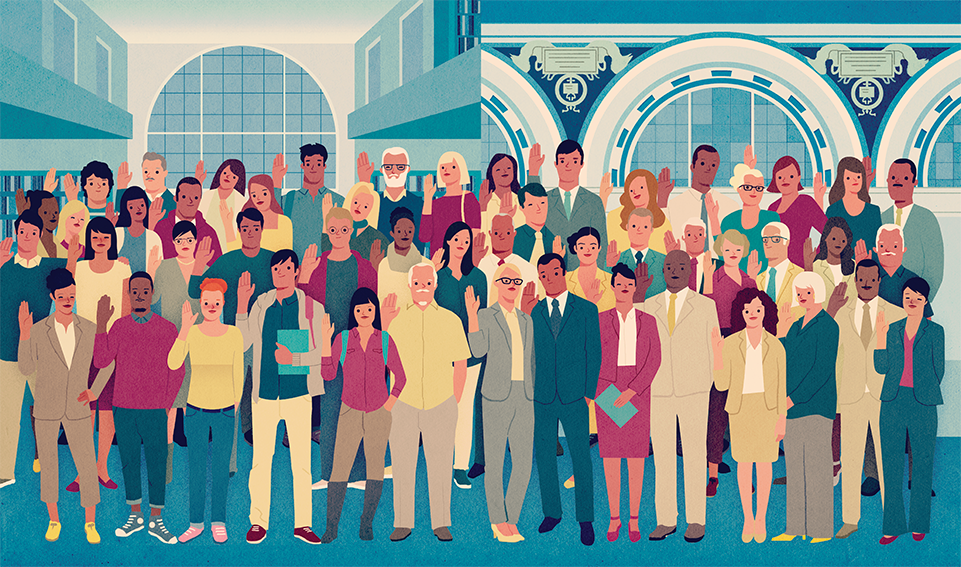 David Ramadan misses the days when politicians talked to one another. “We sat there and we argued, but we also talked and got to know each other,” said the former Virginia legislator, speaking before an attentive audience at UVA’s Alumni Hall this winter. “How many members of Congress really know one another? Even within the same caucus, they don’t know one another. They give speeches to an empty room.”

Ramadan served as a panelist at the 20th Annual American Democracy Conference, co-sponsored by the University of Virginia Center for Politics and the Frank Batten School of Leadership and Public Policy. The two-part symposium was held in Washing- ton, D.C., and on Grounds at the University of Virginia, bringing together people from across the political spectrum to discuss the state of American politics at the midpoint of President Trump’s term of office.

“Our political system is not running smoothly and is in need of repair,” said Karl Rove, former deputy chief of staff to President George W. Bush, during his keynote speech at the symposium. “Part of this is fueled by so- cial media, which is making it easier to live in our own virtual communities of like-minded individuals who share our biases and perceptions. We’ve become very comfortable in our own little cocoon.”

Terry McAuliffe, former governor of Virginia and one of the symposium’s keynote speakers, acknowledged that current politi- cal divisions run deep. But they don’t have to isolate us from one another, he said.

“People have differences in views—that’s okay. We shouldn’t always agree. David Ramadan and I had many discussions and we probably disagreed more than we agreed, but we were still friends,” McAuliffe said.

At times of heightened political tension, events such as the symposium help bridge the gaps in understanding between different seg- ments of the community—not just between Democrats and Republicans, but between the political class and the voting public. 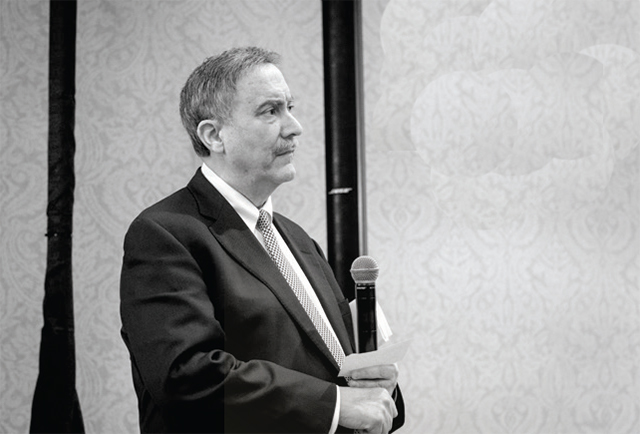 Professor Larry Sabato, director of the Center for Politics, gives the welcoming remarks for the 20th Annual American Democracy Conference at Alumni Hall.
To Maximize Potential

Gaps in understanding are also common between academics and the public at large, says Allan Stam, dean of the Batten School.

“Traditionally at the University of Virginia and other universities, faculty have wanted to keep their heads down and focus on their area of academic interest,” Stam says. “That leaves a mismatch between the program- ming our schools are able to provide and the demands that exist amongst students and communities.”

Because they encourage faculty to broaden their vision and collaborate, partnerships that cross the boundaries between schools and departments play a particularly vital role at UVA, according to Stam.

As one of the earliest initiatives of UVA’s Center for Politics— and still going after 20 years— the American Democracy Conference characterizes the Center’s mission to encourage civic engagement.

“It’s our way of saying, ‘Be vigilant, stay active, pay attention,’” says Ken Stroupe, chief of staff for the Center. “The only way our political system gets betterisforyouandItobea part of it.”

Free and open to the public, the conference always seeks to include newsworthy speakers. In 2016, for instance, Kellyanne Conway served as a keynote after managing for President Trump’s campaign. At the same event, Center for Politics found- er and director Larry Sabato interviewed Khizr Khan, the Gold Star father and outspoken Trump critic who delivered a speech at the 2016 Democratic National Convention.

This year, the conference unfolded in two parts, the first in November at George Washington University in Washington, D.C., and the second in January at UVA’s Alumni Hall. Both symposiums included notable speakers from across the political spectrum, including Congressman Adam Schiff, Senator Ted Cruz, former Virginia governor Terry McAu- liffe and former Deputy Chief of Staff Karl Rove. More than 400 people attended the UVA portion of the event.

“As an institution, democ- racy is not propped up by anything other than our own participation,” Stroupe says. “If it weakens, other forms of govern- ment will happily fill the vacuum. When we forget that, we take a risk—and it’s a big risk.”

“Creating cooperative relationships with units across Grounds enables us to do pro- gramming and offer classes that probably wouldn’t be there otherwise,” he says. “That ends up being of great interest to our students.”

Last year, the Batten School and the Center for Politics embarked on one such partner- ship: a three-year collaboration to further both educational and community-engagement goals. The American Democracy Conference was just one part of a symposium series born out of that partnership. Titled “Democracy in Perilous Times: Unprecedented Challenges and Controversies,” the series features more than 25 events staged over the academic year, a substantial portion of the 40-50 events the Center typically hosts in that time frame

“In these polarizing times, promoting citizen engagement in government and politics is an uphill battle. We will never be success- ful unless we approach the challenge across many fronts,” says Larry Sabato, founder and director for the Center for Politics. “Ac- tive participation is necessary for the health of democracy as an institution. The system simply doesn’t work if the public fails to par- ticipate, and it won’t work well if we fail to adequately teach the next generation of pub-lic leaders. That’s why our partnership with Batten is so fitting.”

The Center for Politics enjoys one of the highest public profiles at the University, thanks to Sabato’s long career and frequent media exposure as a political scientist. “Frank- ly, Larry and his staff have a Rolodex that ex- ceeds ours,” Stam says. Center for Politics Chief of Staff Ken Stroupe notes that those connections have always been vital to the Center’s work. “We do try to bring in high-pro- file elected leaders, as well as academics and members of the media,” he says. “That’s been our mission, really, from the start.”

As a small research center, the Center for Politics is nimble, Stroupe says, “without a lot of hierarchy to get approvals” for new ideas. As UVA’s smallest and newest school, Batten has always stressed innovation and entrepre- neurial thinking in its curriculum.

Thus, not only are the two entities well matched, but their partnership also offers an intriguing new venue for Sabato’s teaching. This semester, the politics professor is collab- orating with Stroupe to offer a new class under the auspices of the Batten School, titled “Les- sons in Leadership: JFK and the Most Personal Office.” Although John F. Kennedy’s presidency was cut short by his assassination in Novem- ber 1963, his legacy lives on today, Sabato says.

“We can trace the impact of a brief presidency to the present,” he says. “Kennedy’s image, how he performed as a public official and many of the issues he confronted during his time in public office still influence public leadership and public policy today.”

Offering the class at Batten opens Sabato’s teaching up to a new cohort of students, says Stroupe. In the past, Sabato taught only through the politics department at the College of Arts and Sciences, where the interests of most students lay in politics, as opposed to public policy.

"In these polarizing times, promoting citizen engagement in government and politics is an uphill battle. We will never be successful unless we approach the challenge across many fronts.”

“We’re trying to focus on the intricacies of the Kennedy administration’s public policy,” Stroupe adds. “That sort of granular discussion of policy development fits perfectly with the types of classes Batten offers.” 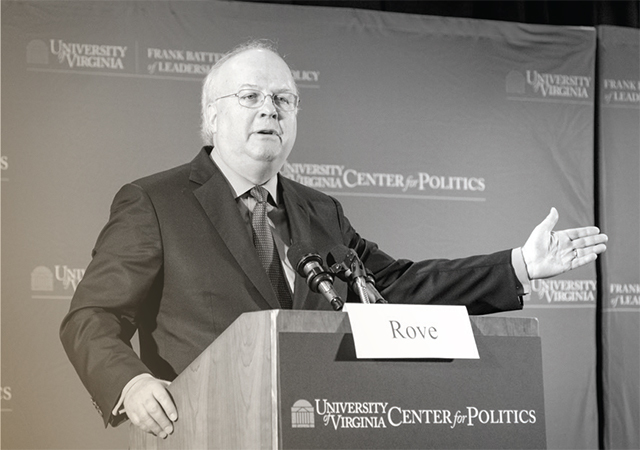 Twenty-five percent of the Batten faculty are political scientists, Stam says. Politics is always of interest at Batten, since policy of- ten flows from political considerations. But beyond the central political question—“What can we do?”—lies a deeper quandary: “What should we do?”

“My hope is that the relationship between the School and the Center serves as an example to the University as a whole. Partnerships like this allow us to maximize our potential as a university community.”

Teaching is so central to the partnership between the Batten School and the Center for Politics that discussions concerning potential courses were what led to the development of a broader relationship.

"My hope is that many of these students will go on to a career in public, service. Believe it or not, I still view it as a high calling— because it is.”

“We began exploring the different possibilities for Larry Sabato teaching a class at Batten,” Stam recalls. “And that enabled us to develop an institutional trust between the Center for Politics and the Batten School, which has really blossomed into a mutually beneficial relationship both for the Center and the School.”

Sabato is convinced that civic engagement begins in the classroom.

“My hope is that many of these students will go on to a career in public service,” he says. “Believe it or not, I still view it as a high calling—because it is. So it’s important for these future leaders to understand how his- tory influences current events.”

In fact, it was through his teaching that Sabato decided to launch the Center for Politics in the first place. 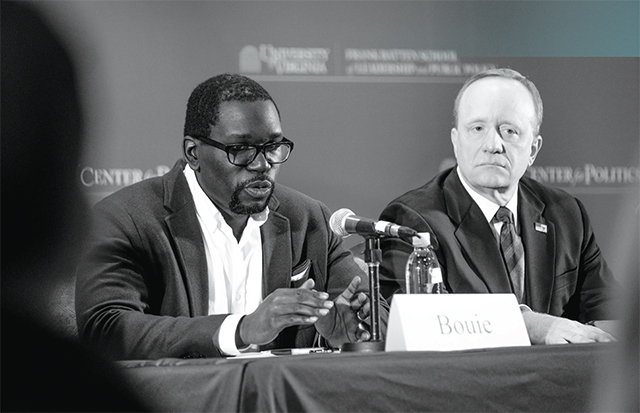 Panelists Jamelle Bouie, a columnist for The New York Times, and Paul Begala, a former advisor to President Clinton, discuss President Trump at the midterm of his presidency.